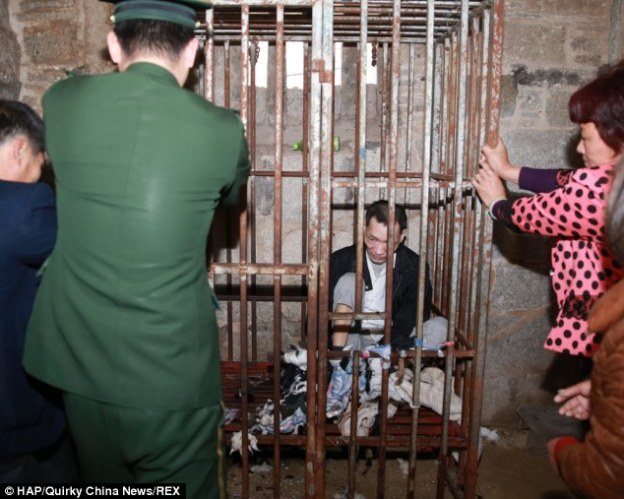 (based on a personal take of the iron cage) Image from unrelated article: http://www.dailymail.co.uk/news/article-2563953/Mentally-ill-man-freed-discovered-iron-cage-EIGHT-YEARS-mother-locked-it.html selected because displays symbolically when someone is just about to be freed with the help of others.

I have often considered the term “power,” in a personal capacity and tried to understand how it works from top down and from bottom up.

Politically aware Senior management are often strongly aware of the cyclic and changing nature of the power dynamics between people, of when is a good time to take and action and when it is not and their grasp of these concepts leaves those round them un-empowered and at the mercy of a cage that befalls them.

It is often difficult to get under the skin of power dynamics and use them to our own advantage simply because power centres and dynamic and the perception many have of them feel over time to turn from perspective to fact.

When a “fact,” is accepted within someone’s own iron cage transitioning from that mind-set takes both strong courage and will within the individual themselves. Being asked to question perceived power or take a stand is not enough, one has to visual the cage not existing in the first place and when something is very real so this becomes hard to do.

For the individual within it the Iron cage is very real, they will feel disenfranchised, lacking control, powerless based on perceived barriers to decision making, autonomy, barriers that often have hidden keys for those on the outside.

If the problem was the transition of a one to one relationship then perhaps the manager and staff member would have a chance to get to a point of mutual understanding but add in the complexity of group dynamics and modern individuality of generation X and Y and we begin to realise the full extent of the problem, it becomes just like imagining the direct relationship between how the butterfly beats its wings and the tidal wave from chaos theory, just too much information to comprehend easily. As transformational leaders need a different key to unlock each individuals cage and sometimes we cant find the right one.

In fact there are some cages we need the help of others to unlock for we are too distant from the language used by the caged to help them ease themselves free.

To explain this phenomena we need only have a phone call and realise how misinterpreted some of our actions are in comparison to our intentions. To go further we in fact have to have the same phone call twice with two different people. We quickly realise that the prejudice that both we and the other party put on each other colours the result of the conversation.

Talk to a sub ordinate in an organisation and you will realise the deference they show to certain symbols and principles , things such as self doubt, and a feeling of the need for external support, aspects which you feel the individual is more than capable of over coming but you fail to explain to them and know in some scenarios it just isn’t the right time or you aren’t the right person to set them free. You may have believed you had offered an open door but the other party sees a closed one, or has a worry you will lead them through a door at their risk.

Talk to a superior or client and notice the reversed power dynamic that occurs you in this case, there are certain questions you dare not ask, certain points you dare not make. Certain points the person makes you quickly reinterpret based on your perception of the individual you meet. The term don’t spend to long on that, becomes a defined period of time of exactly 2 weeks.

Perception colours our reality and defines the nature of our existence as humans and as such no matter who we are we create some form of cage in which to exist.

To Transform Perception, Solidarity is a powerful weapon. In the fight against the perceived “facts,” of power we find it difficult to define clear processes of how to engender a change of the cage. We need only watch game shows that hinge on everyone agreeing to take less to see how individualistic we each are and how we react to real world stimuli.

The worry for the person in the cage, is even if I do stand up, will I be singled out? Will I loose my position? Is that person a person I can trust? Do I believe in their opinion or abilities? Will I damage my own future? With such thinking so the person adds a few more bars to the cage, it becomes tighter yet none of their peers will blame them.

After all we blame the conductor not the orchestra. For the individual “they had no choice,” we each externalise the factors we don’t control. We share in that common view, it is of course a “fact,” in our minds.

Those who are singled out receive little support from colleagues simply because everyone has to look out for themselves and as a result relationships can be damaged and frayed unfortunately because of this everyone looses a little part of themselves.

The question I would pose is this, Would it not be a surprise if everyone in your workplace left or expanded their iron cages at once? If solidarity was possible and you could set new boundaries. If you did trust the likely good intention of those round you more than the worry that other forces are out to crush you.

Imagine If in your office, stakeholders could work together understanding their own role and not crossing over in the roles of others, accepting what people say, in a way that resulted in both managerial and staff empowerment.

I would ask would your life not be better? If you where indeed free in the perception of the iron cage or at least you had others who where locked in the same cage to keep you company? This new shared care could help you get on with a new view of life in a new and more empowered role and position.

Here’s to sharing cages with our colleges, and sharing more common goals and perceptions.